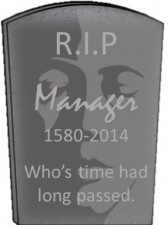 Manager was born 1580. Manager was a person who had controlled and directed institutions, businesses, and divisions as well as countless people for over 434 years.  That all came to an end today when its time and usefulness truly came to an end.

In this day or for that matter, in any day, should Manager have been allowed to say that one person should be allowed to have “control or direction” over another? I personally have never believed this to be the basis for a healthy business relationship. So while I honor Manager’s life, I am happy to see us moving on.

Do you believe you can actually control the thoughts and actions of another person?

If you agree with our premise then you’ll also agree that it’s time for the role of “manager of people” to rest in peace after living a long life of over 434 years.

So what are today’s responsibilities for someone who has others reporting into him or her? Here’s a start:

What else would you add?

And based on these responsibilities, what should we call this role?

Rest in peace, Manager, who’s time had long past.

How to Successfully Integrate New Leaders
«
Prev
1
/
4
Next
»